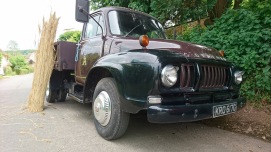 Well there’s been plenty of thatching and plenty of life this last month. Spring sprung straight into summer, and we have been thatching like demons ever since, making good headway on Mrs W’s Rawridge roof. Luckily the house is only 20 years old, so the roof structure is in very good order.
We finally have ‘The Old Girl’ on the road…our Bedford J-type. Not the fastest, or the quietest, but definitely the classiest way to deliver the reed…and a lot easier for clearing the old reed away. She still needs a bit of loving care on her bodywork, and Daisy will make some sidings out of chestnut when she can
Daisy has met her match in the tidying up campaign, as Mrs W. is without doubt, the tidiest customer we have ever had….that is if I still have a Daisy. After dancing madly to some Two Tone at the York Inn’s Vinyl night accompanied by a very funky medallion man (can’t imagine who that was!), she discovered that her dodgy knee bone was indeed joined to the hip bone, which went into spasm…and she’s not managed to walk let alone work since. Luckily she lives opposite the very brilliant Corrie, who’ll have her fixed up in no time.
It’s funny what you find you have in common with people: For several years I’ve been following the career of Carlos Acosta, a Cuban ballet dancer. Now I’ve not generally given ballet much of my time or interest, but he caught my attention once as I flicked through the channels on the TV, dancing with so much power and passion, I had to stop and watch. He now has his own dance company, and Daisy and I booked tickets to see their debut at the Wales Millenium Centre and took her Dad as well…turns out that we could have whisked Mrs W. off to Wales with us, as she’s a bit of a fan too. Wonder if we could warm up each day with a barre work out on the scaffold….that should sort Daisy’s hip out!