So we have thatched our way almost to the water table at the gable end, the weakest point in the old coatwork…by a long way.  As we stripped off the top layer, looking for the timbers beneath, it became apparent that they were long gone. Any timber left was rotten as a pear, and broken away from the main roof structure. 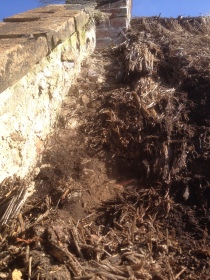 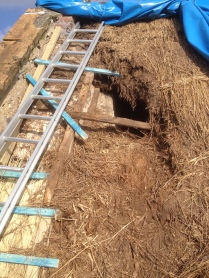 The pictures above show the absence of timbers over the chimney breast and a marvellous pile of compost, which we replaced with a timber ladder to carry the thatch and give us something to fix to. The last photo is of the replacement roof structure a step down from the chimney breast. Finally where we normally have the layers and layers of old coatwork to fix into, we now have to replace it to bring the depth of thatch up in the same plane as the rest of the roof….effectivly thatching it 3 times in the same spot!

So now for our final coat. We did just point in around the gable where the mortar had rotted out over the years… 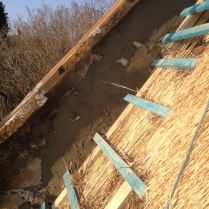 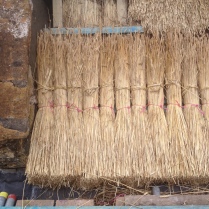 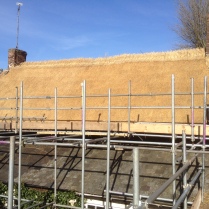 Just the ridge to go, the eaves to cut out and the coat to sweep and dress…on my own again as the apprentice is off on holiday…sigh!